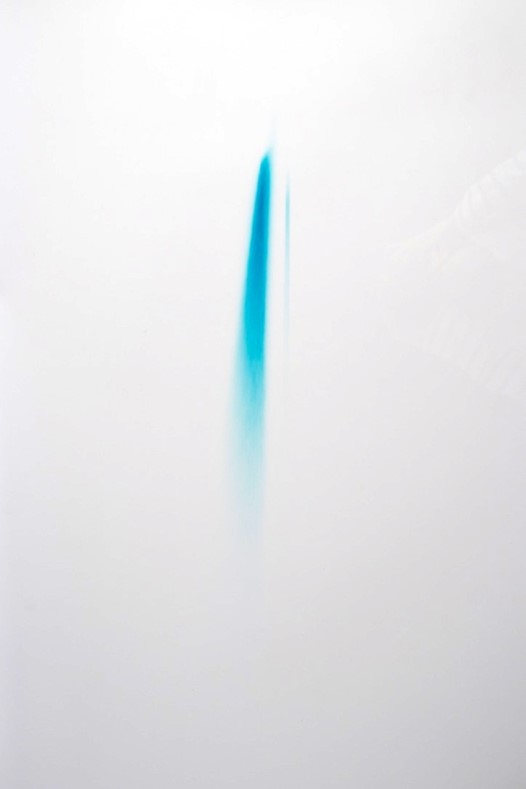 This think piece addresses the case study element of a project that engages with the photographic phenomenon of ‘light fogging’. Referring to unintended light that reaches the photosensitive material prior to processing, light fogging is typically understood as disruptive and unwanted. This speculative multi–perspective piece challenges those notions by disclosing the vibrant qualities of light fogging.

On asking the audience what’s going on in this image (Figure 1), they note the long narrow rectangular piece of white paper. In the upper half of the image, a soft cyan beam of rays melts away on the expanse of the white paper surface. This cyan colour trace appears soft and subtle, occupying only a small portion of the white oblong. From a distance, the work shows almost nothing; coming closer, you discover a smooth surface that invites you to touch it, and you sense the vibrancy of that cyan ray of light (Figure 2). Then, you notice the curving surface of the photographic paper, which is anything but flat. It is not fixed on a mount, or straightened, or parallel to the wall. Instead, its long sides are supported by a minimalist wooden frame, allowing the paper to curl. As the paper expands into the space, the work gains depth and becomes sculptural. Entitled ‘Light kissing’, this mixed media installation is a collaboration between Chromira (an LED digital printer) and photographic artist and researcher Andrea Jaeger. Eluding negative notions of destruction by stimulating critical thought and making aesthetic sense, the work is anything but undesirable.

On asking an image technician what’s going on in this image, they skilfully shuffle the piece around on the photographic lab’s huge worktable to take a closer look. They tell me it’s fogged paper; what you see here is a machine fault that exposes the tensioned photosensitive paper to unintended light as it sits in the machine, ready for printing. The result is a discolouration of the paper that shows as a blue streak; known as the leader, this is a crucial element in the process of digital LED printing, tensioned tightly around one of the two drums in the LED digital printer’s light-tight interior. (The piece on the opposite side, wrapped tightly around the other drum, is called the tail). By default and in erratic fashion, a red LED monitoring light exposes the photosensitive paper leaving this blue streak on the fogged paper. In the lab discourse, fogging is any unintentional exposure that disrupts the seamless flow of image production, and this fogged paper is routinely torn up and thrown away.

From Chromira’s perspective, what’s going on in that image is a photographic practice; the machine exposes the tensioned leader and produces a photographic image on the leader’s surface. Wrapped tightly around the drum, the leader remains for the most part unexposed, untouched by the LED lights—unless, intentionally or otherwise, Chromira does what it does, emitting a red light that makes a mark on the photosensitive material. That mark is unique, differing each and every time (Figures 2 and 3). In short, Chromira generates one-off photographic images by performing a photographic practice commonly known as fogging. Beyond negative connotations, Chromira’s disruptive photographic act reveals an image-generating agency in every unique mark.

This more-than-human perspective directs attention to the disruptive reality of Chromira’s mark making as productive labour in the process of image production. This reality breaks from the image technician’s expectation of a seamless result-oriented process. By disrupting that seamlessness, the flow itself becomes clear in its operations, agents and conditions. The disruptive reality of Chromira’s mark making draws attention to the vibrant agency and multiple photographic practices that inhabit the process of image production. This more-than-human conception of practice acknowledges imaging technologies and photographic equipment and materials as active collaborators in the making of photographic images. The reality of Chromira’s mark making disrupts traditional human-centred concepts of image production—dominated by a subject in front of the camera and a subject operating the camera—and of practice as the photographer’s alone. Viewed as co-productive and creative labour practices, light fogging and the materiality of the leader are Chromira’s contribution to an expanded concept of photographic practice that acknowledges the more-than-human networked practices at play in image making.